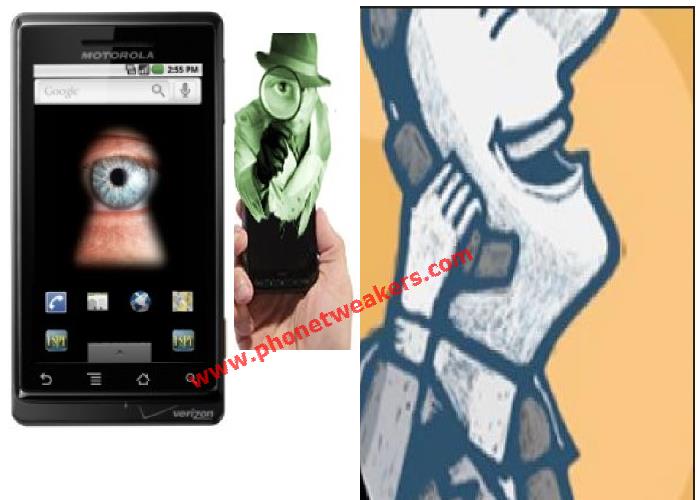 Your phone knows all your secrets it like your personal treasure safe box, where you unknowingly keeps your personal secrets and golden treasures. Imagine what will happen if someone is using your phone to spy on you, that means they will know about you deep personal secret, your conversations, your movement/locations and even about your golden treasures. Today on Tech Myth, we are going to talk about Five interesting ways your smartphone might be used to spy on you check it out below:

1. Through your cell phone camera

Yes it is very possible, Szymon Sidor a university student claims to have written an Android app that takes photos and videos using a smartphone camera, even while the screen is turned off. He further claims his android app works by using a tiny preview screen – just 1 pixel x 1 pixel – to keep the camera running in the background. This tool can be used by any hacker to record your activities and exploit your phone without your permission or knowing. According to Sidor, there is a major flaw in the Android operating system which won’t allow the camera to record without running a preview – which is how Sidor discovered that he could make the preview so small that it is effectively invisible to the naked eye. Sidor was able to demonstrate how the app works in his video on youtube, using his Nexus 5 smartphone. you can watch the video here:

For a long time, Chinese phones from Huawei, Xiaomi and others were suspected to be secretly transmitting user data to servers in China. The companies have repeatedly denied this, and the NSA has been accused of counter-spying too. In turn, China is imposing security demands on US companies.

3. By using your phone IMEI or MEID number

An IMEI or MEID number is like a fingerprint that identifies each handset that is created by a certain electronics and communications company. No two devices will have the same IMEI or MEID, which makes it a very useful tool for tracking lost or stolen cell phones.

The Triangulation process works by sending a signal to a satellite then to the handset. By doing this, the exact location of the handset will be found using a global positioning and receiving satellite or GPRS. The only way to keep a satellite form tracking the phone is to remove the network SIM forever or to change the IMEI number, which is impossible because the only ones who have an IMEI changer are the manufacturer themselves.

If a user phone has been reported stolen or someone has commit a certain grievous crime, the authorities can write an IMEI tracking letter which will be sent to all the network providers in a country. The network service providers will put the phone IMEI number on surveillance. Whenever the phone is switched on after putting a SIM, it tries to register on network and phone’s IMEI number is sent to service provider during this process. So service provider will come to know about the latest sim-card inserted in phone, user dial number, received calls, contact list, recent location and address and even all the sent/received messages by the phone user. However, If there is no SIM in phone or phone is kept switched off, it cannot be traced with IMEI only.

4. By using the social media

According to security researchers and user’s reports, social media sites may be accessing our devices and spying on us using our camera, microphone, GPS, and other features more than we realize. And a lot of people are uncomfortable with what they believe is an invasion of their privacy.

Recently a Florida TV station ran a news story suggesting that Facebook uses your phone’s microphone to listen to your conversations and serves up ads based on what you talk about. After the story blew up on (of course) social media, Facebook published a statement saying that it doesn’t listen to your conversations for the purpose of selling ads. But, Facebook says, it does use your microphone “if you have given our app permission and if you are actively using a specific feature that requires audio,” such as features that allows you to include music you’re listening to in a status update

Last year, the Netflix Android app began requesting access to the microphone, alarming some people who wondered why a movie-streaming app would want mic access. The company said it only wanted to enable users to call customer service from their phones/tablets, and didn’t plan to listen to their phone calls.

Recently, some android users reportedly downloaded a Facebook app that automatically upload their latest camera photos to their profile and timeline without their permission. One of the affected user said the malicious app secretly uploaded her insurance card and her nude pics to her Facebook timeline. The application further went ahead sending friend request and messages to all her phone contact to like her recently uploaded pictures.

You should always be aware that your smartphone’s camera geo-tags every picture you take, that means anyone can see your locations by just checking out your pictures in your social media profile.

Fitness tracking apps like Apple Health in iPhone and Google Fit on Android, has the ability to track your phone anywhere you are, by using your phone GPS data. While this apps is great for keeping you healthy it it is also tracking your movement and locations.

There are a ton of other apps that are accessing your GPS data for seemingly no reason. According to Carnegie Mellon University’s Privacy Grade website, which evaluates Android app permissions, many popular apps including word game Words With Friends and screen-lock app GO Locker want access to your precise location data to serve personalized ads or enable certain app functionality.